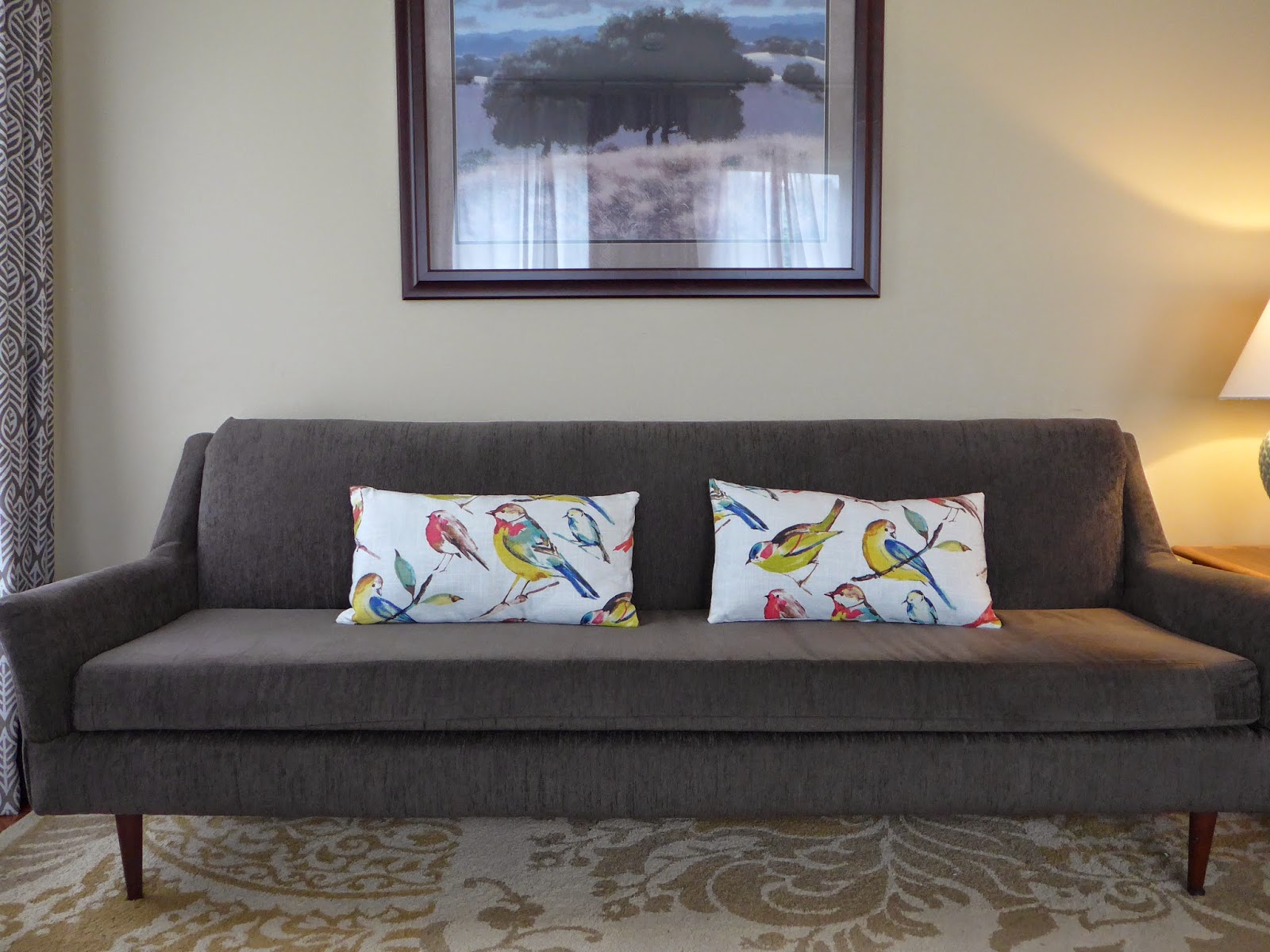 A sewing project completed! I have had these two lumbar pillow forms f.o.r.e.v.e.r with plans to make covers. I made one a long time ago and the other was left naked a ridiculous amount of time.  One reason is that I ran out of fabric to make the second. I finally ordered the remaining yard of Richloom Birdwatcher Summer fabric from OnlineFabricStore.com. The Summer print has a nice white-ish background.  The Meadow print has a beige background. I accidentally ordered the wrong colorway the first time around. My bad but not really. This print would make a great tote bag too. It felt so good to sew something and enjoy the finished project. :) 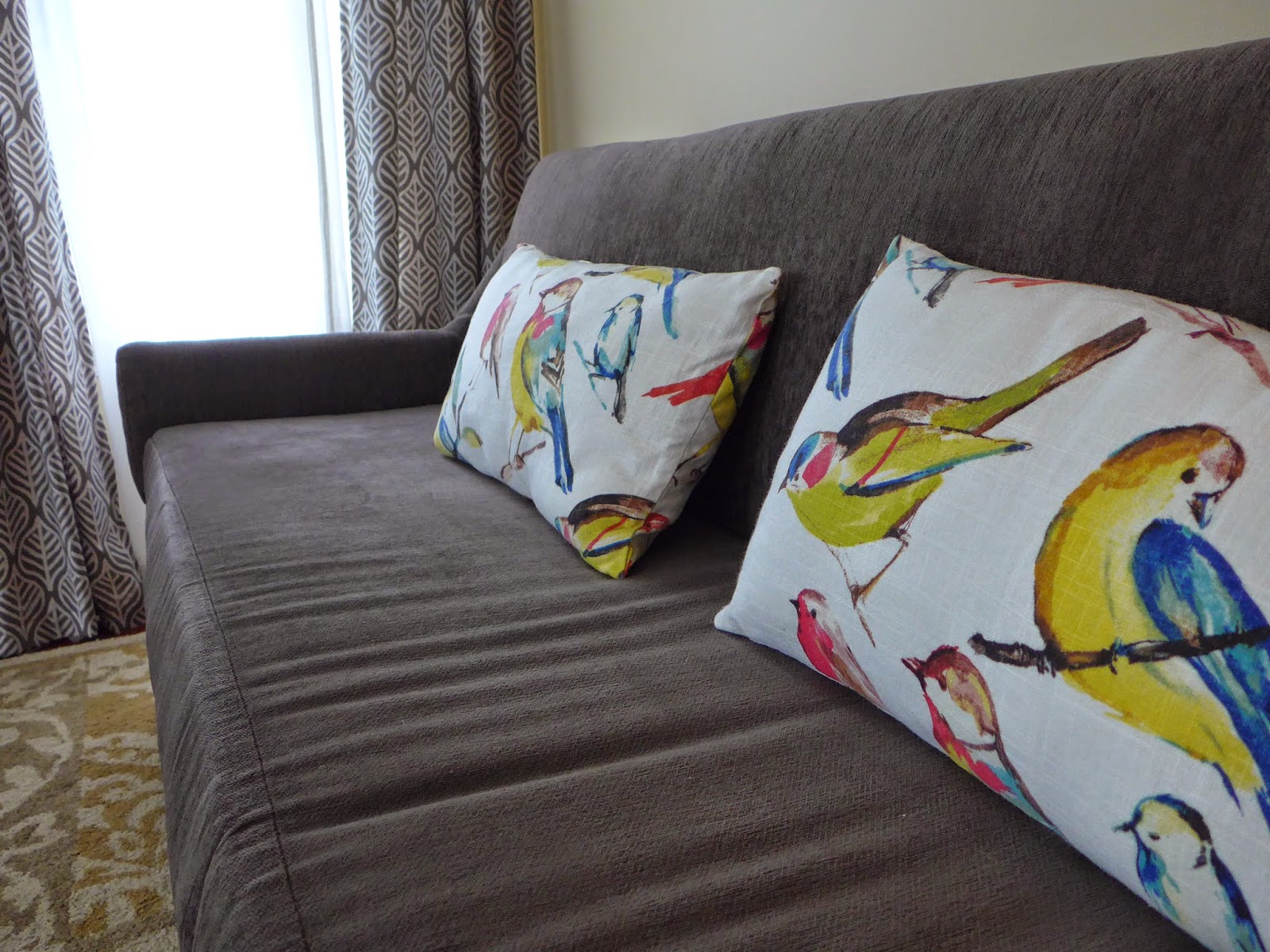 Progression of the Front Garden 2014

When we purchased our home there wasn't much landscaping established. Which can be good if you love gardening (which I do!) but bad if you are indecisive (which I am!).  The other morning I stayed up after the 5:30 am feeding for Lillian and decided to take advantage of the coolness of the morning and enjoy some outside time to myself while my husband was still home.  I grabbed a cup of tea and my gloves and headed outside for some long overdue weeding.

But before we get to that, I had some fun looking through old photos to see how the landscaping is progressing. 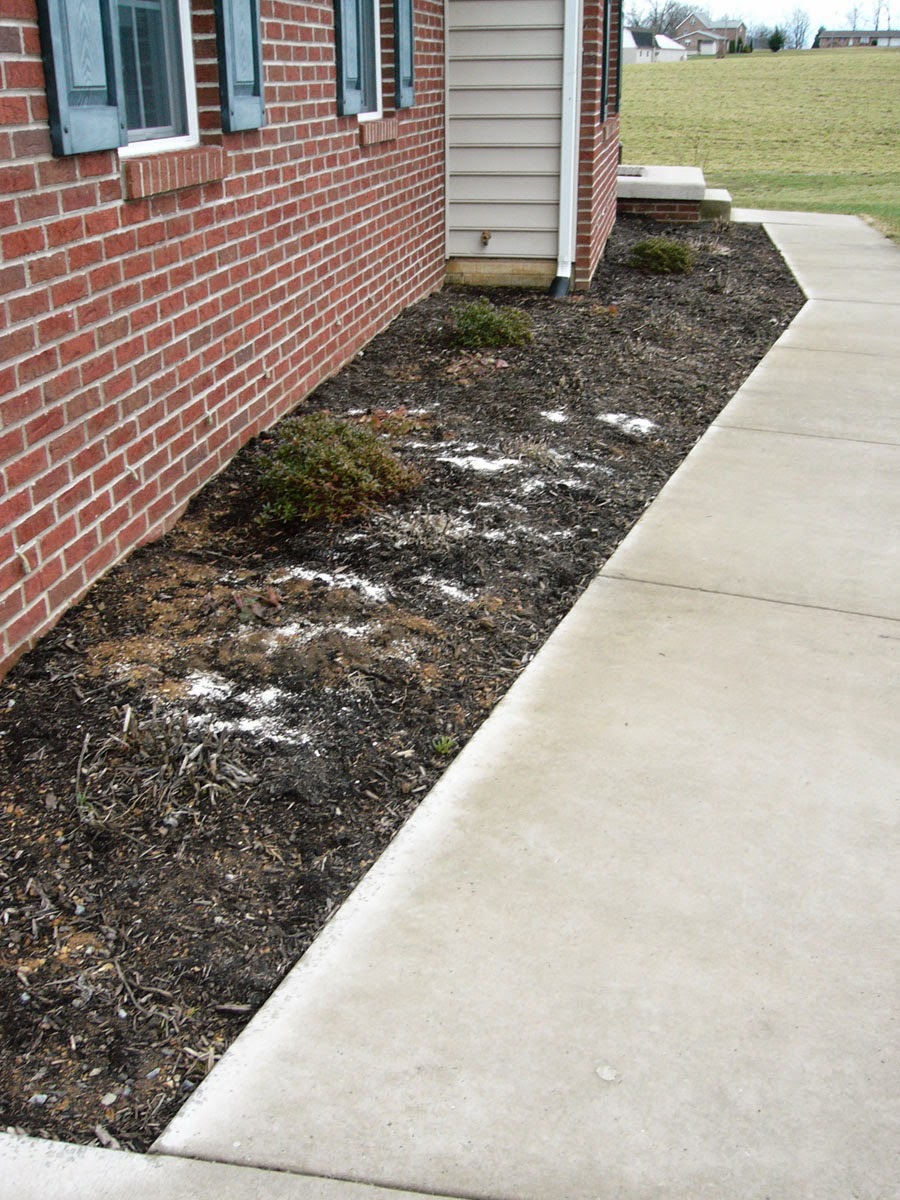 A year after we moved in I dug up all the hostas. They all desperately needed split.  The lime green ones overgrew the space and the variegated variety were constantly being eaten by beetles. Some plants made it to the neighbors and the rest were re-homed to the woods. I moved a weigela bush that was planted outback to the spot in between the garage windows. There were two azalea bushes already there.  It stayed like this for a season before I found a handful of hydrangea bushes for $2ea at Lowes.


The fall of 2011 I tore everything out again. Moved the azaleas and weigela bushes over by the front step and centered under the window and planted 150 tulips bulbs. I also started a row of coral bells along the front edge.   Four hydrangeas were placed under the windows of the garage. At $2 each for gallon plants I knew I could plant them here and move them elsewhere in a couple of years if they outgrew the space.

Now this year. With a new baby. I mulched this spring at 30 some weeks pregnant and did nothing else.  So last week I stepped outside into the morning light and set to work.

The hydrangeas are going crazy. Crazy beautiful, but all of them can't stay here for another season. One of the plants has a very strong central leader. I am thinking of pruning that one into a tree. I hope it works out. I know I will have to keep it trimmed up but it could turn into something unique and beautiful. Two others are going to be relocated to the edge of the potager garden once that is finished. One will stay.

I only weeded half the garden before my little Lily-putian started calling. 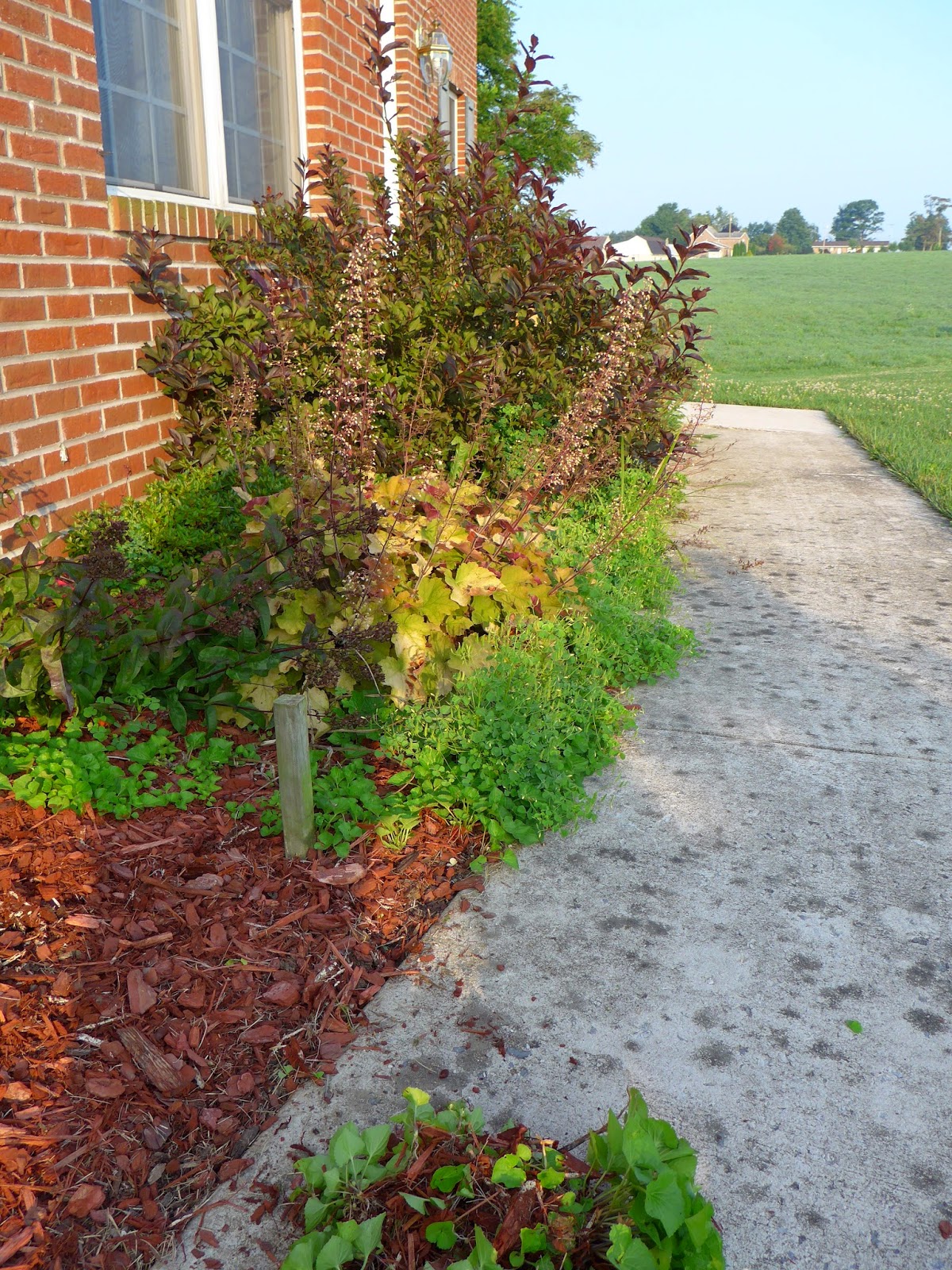 This is the other half that needs completed. But you can see how the weigela has completely outgrown itself, even with harsh trimmings each year.  I need something else for the space. Preferably evergreen. And my coral bells need split again (yay!). I will continue to plant those further down the walk. And the azaleas are still there. Turns out they are a dwarf variety. I need a better spot for them or they will get re-homed into the woods as well.

I am so glad I decided not to put in a vegetable garden this year. If I had it would have been hopelessly abandoned by now.  My summer has been a summer of A/C with nursing Lillian. It felt so good to get outside and work.  After Lillian was fed the second time that morning, I slipped back outside to finish my tea and eat some breakfast.  I felt so accomplished and my mug gave me the positive affirmation I needed that day.
Posted by LeeAnn at 1:06 PM No comments: 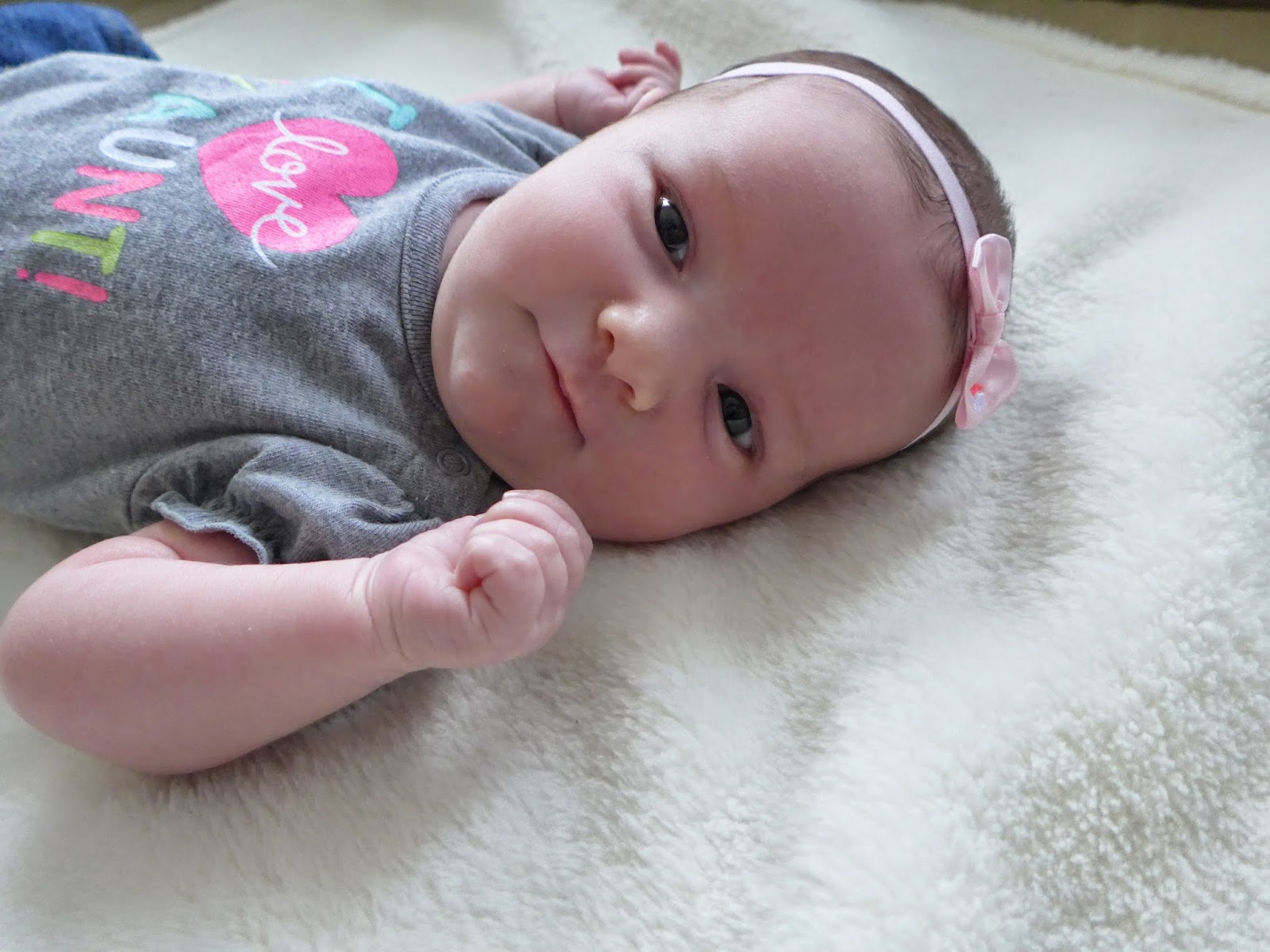 AND ONE MONTH LATER.... we are still alive. And can I say how excited I am for a baby girl!

Think of the sewing!  Actually, at the moment I can't even begin to think about sewing but in the future I see adorable little diaper covers and dresses.  :) 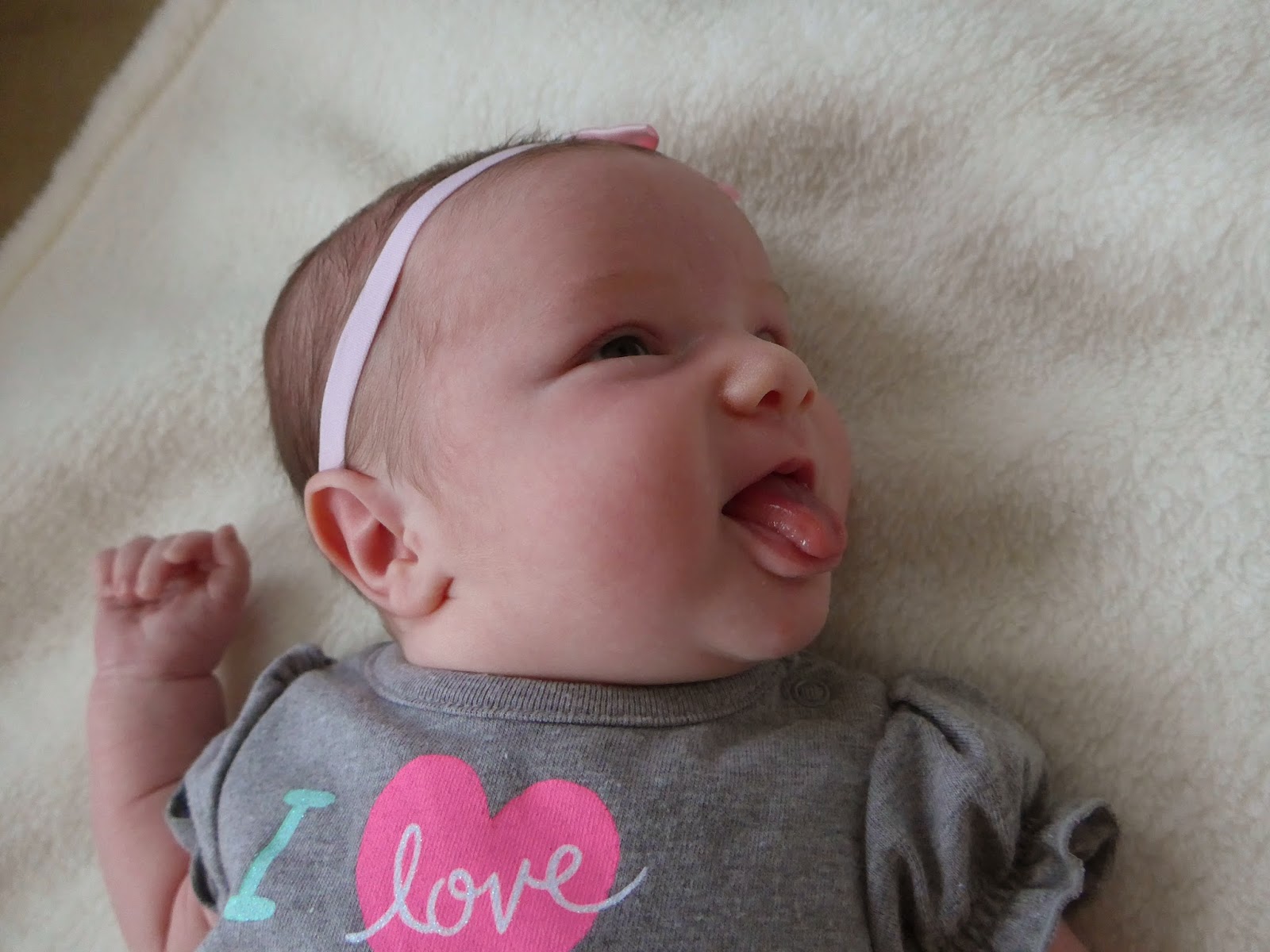 I am just starting to feel like I have some sort of handle on my day. It was quite an adjustment. I told her when she was born that she was our guinea pig and since she didn't object I think she is OK with that. I had one month photos taken last week. I am looking forward to seeing them when they get back from the photographer.

But I have been spending a lot of time on Pintrest since I've been breastfeeding, so I am sure something creative will occur sooner or later. 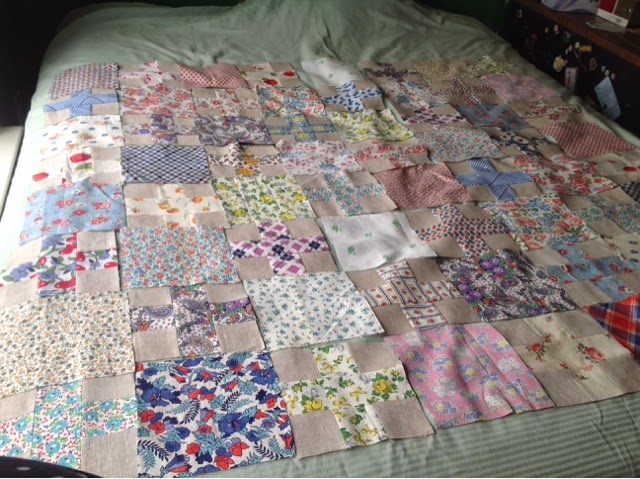 I have a few projects in the works I thought I would document. In April of last year, I documented the start of these feedsack cross blocks. I also noted at that time that I had these fabric scraps for 2 years previously. Thanks blog for confirming my hoarding tendencies! This week I had the itch to work on this project again. I have learned a lot about vintage fabrics and how delicate they can be. I decided that I need to make my little showcase/print sampler quilt and pass on the remaining scraps. I doubt I would use this quilt full time once completed but I know I will love looking at it. I am drawn to the history of these fabrics, the way they helped market common goods, how women searched and sought out prints to sew with them in their own homes, and the beautiful cotton texture of each feedsack.
74 blocks later I have them laid out on the spare bed. Each block measures 6.5"x6.5". I think I need to add an extra row before adding the boarders. I plan on backing the quilt with a pieced backing of plain off white feedsacks that have words of the former contents printed on them.
But this is #3 on the list of WIP quilts. I need to finish two baby quilts before I spend more time on this one. I have a deadline on the other two quilts..... 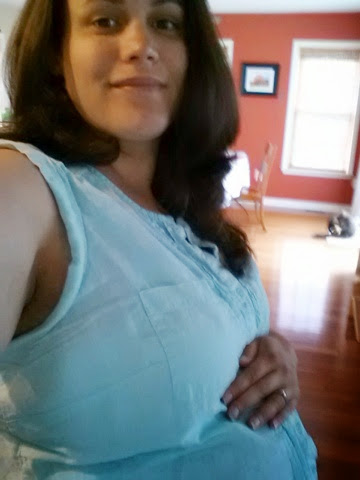 39 weeks pregnant today! We didn't find out the gender so I made a boy and a girl quilt. Both tops are done and are ready to baste and quilt. I haven't mentioned a thing on this blog about our struggles with pregnancy, but after years of infertility we are beyond excited to welcome this joy into our lives.  I am currently on maternity leave (I travel quite a bit for work so I get to start my leave two weeks prior to the due date) so between cleaning, organizing, resting, and sewing I may actually be on here more often.
:)
Posted by LeeAnn at 10:21 AM 2 comments:

Valentine Confession: I have started a sewing project that I am completely out of love with now.
It started off well. Good intentions. Using up scraps. Trying a new technique. I have seen so many other quilters turn scraps into improv quilt blocks (ala Denise Schmidt) into gorgeous works of art. They always say, "don't edit" and "just pick a piece of fabric and sew." Well, my friends, I am here to tell you I stink at it and can't stand to look at what I have sewn together. 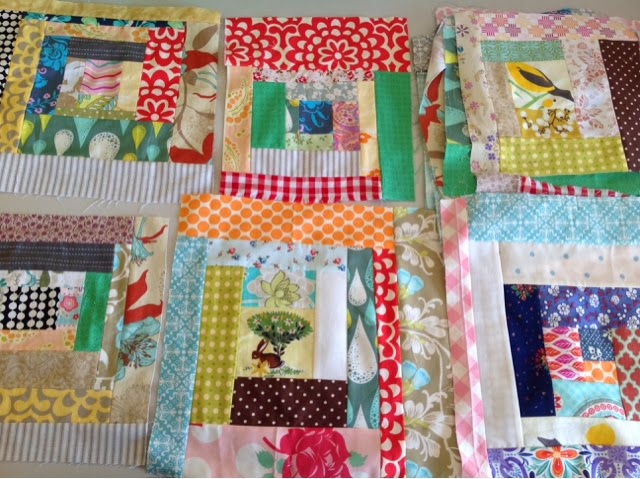 I even got together with a sewing friend recently and she helped me sew up a few more blocks. Loved the time we had together, but when I got home and spread all the blocks on the floor my husband's response just confirmed my fears. He just stared at the haphazard arrangement on the floor and asked if I intentionally made this because (in his words) it looked like a "crafting disaster."
And it does.
So now I have 20 or so 12x12" blocks and I don't even want to keep them. Can you help me see the beauty in this mess? What would you do with them? Would you just sewing them together and be done with it? Maybe hack the blocks apart and pair them with a solid?
Can this be saved? Can I fall back in love with this project?
Love is a fickle thing. And I am ready to call it quits!
Posted by LeeAnn at 3:39 PM 5 comments:

Next week I leave for a business trip to GA. (Please, no bad weather on the east coast going to or from!)
Every time I travel I wish I had a garment bag. Either to place an extra pair of shoes or to bring dirty laundry home in. Every time I travel I usually end up swiping the dry cleaning bag from the hotel closet for these purposes. They work, but they are not as cute as this (excuse the iPad photos): 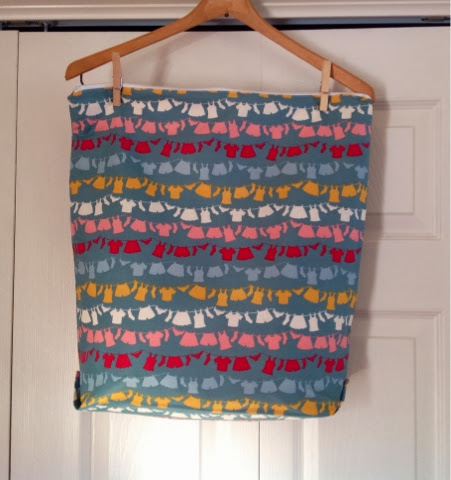 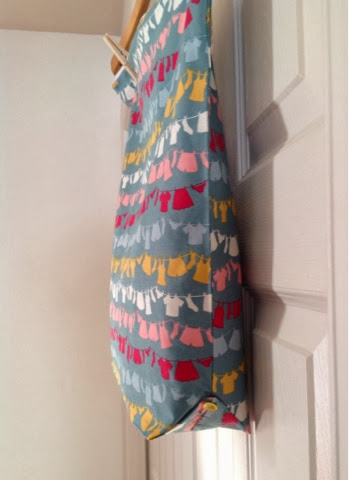 It is fairly large (17x20''-ish) with a zipper top. Lined with an ivory poly lining found at a thrift store ages ago. The exterior fabric is called Wash Day Washing Line Blue designed by The Henley Studio for Andover fabrics. (Find it onsale here- https://www.fabric.com/buy/0301941/wash-day-washing-line-blue?cm_vc=756b1813-cbc1-43b3-84bd-29889bf8fb7b)
I used a half yard for the exterior. For a more spacious interior and to keep that slippery poly lining in place, I boxed the corners and tacked the flap to the exterior with little yellow buttons. I probably have thousands of buttons, but do you know how hard it was to find two yellow buttons the same size?! Remarkably so.
Reorganizing my fabric stash definitely has had a positive effect on my creative output. Next on the sewing to-do list are some clothing makeovers.
Posted by LeeAnn at 9:25 AM 2 comments: 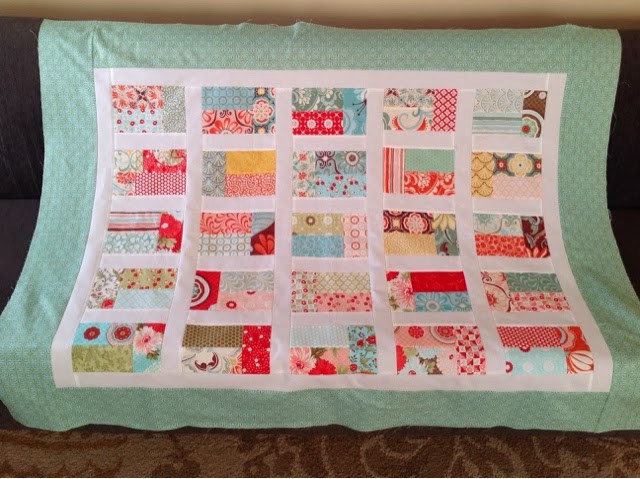 Fabrics included in quilt top: border print from Kate Spain's Terrain collection. Kona 'snow' used as the white sashing. And the prints are a mix of Bonnie and Camille's 'Bliss' fabric and Olive Tree Textiles 'Fandango'. 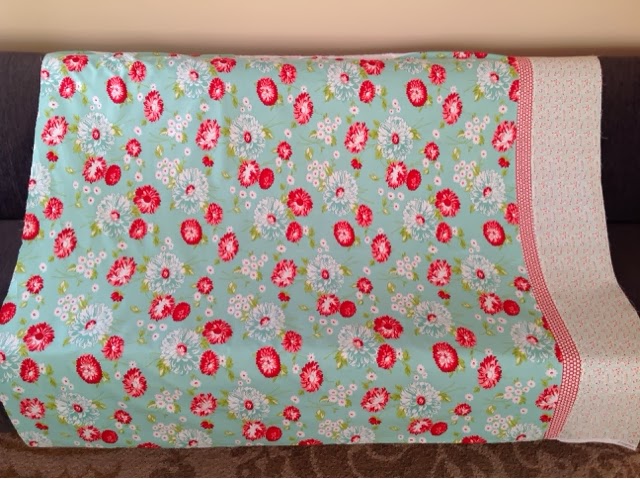 The back is pieced because my math skills failed me, but I still am a fan. I knew I was going to have a hard time locally sourcing either a Fandango or Bliss print for the back. But I have to give a high five to Bonnie and Camille for coordinating their fabric lines because the large floral print is from their 'Scrumptious' line and it works really well! I know the background color of this print reads blue on screen but in person it is on the green side of aqua but too blue to call a mint. I wonder what they call this color?  The red polka dot is from their 'Bliss' line and the small print on the end is also a 'Scrumptious' print.
I love shopping for fabric online, but I am really proud to say all the fabrics for this quilt I found at my Local Quilt Store. I hope to get this sandwiched together with some batting this weekend. I may attempt to quilt this myself in something other than straight lines. I am not much of a football fan. More of a "I'm just here for the food" kind of fan. So hopefully I can tackle this while the game is on instead. :)
Posted by LeeAnn at 4:35 PM No comments:

LeeAnn
Pennsylvania, United States
I got started sewing with the phrase "I can make that cheaper" and a $25 yard sale sewing machine. Now I am finding my groove and loving it!